Gender and Caste at Holi

The Hindu festival of Holi celebrates love, colors, and the arrival of spring. How it’s celebrated can vary significantly throughout India. 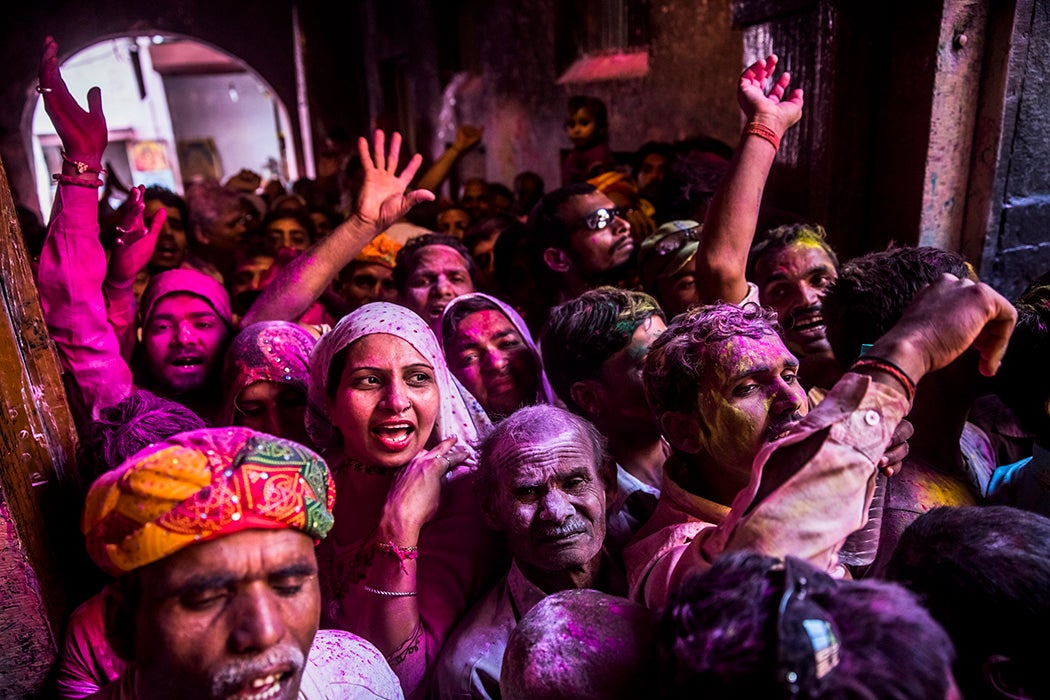 Starting at sundown on March 17 this year, people across India, and elsewhere in the world, will celebrate Holi. Holi is a Hindu festival, but it’s often celebrated in mostly secular ways. It marks the spring season, and features the use of brightly colored dyes. But, at least in some places, it’s also associated with drunkenness, harassment of women, and stark divisions by class and caste. As two accounts of Holi celebrations in northern Indian villages suggest, celebrations can vary greatly from one place to another.

In 2013, Sanjay Tiwari of the Centre for Environment Education in Lucknow, India described a Holi celebration in the village of Charthari in the northern state of Uttar Pradesh. The holiday begins after sunset with the burning of a communal Holika pyre, symbolizing the victory of good over evil. After that, people are free to use vulgar insults and songs that would normally not be allowed. But Tiwari writes that this freedom isn’t universal. Brahmins generally direct the verbal abuse at Dalits and other people from lower castes, but do not tolerate the reverse.

Once the procession of men moves on to the next location, Tiwari writes, “Holi is over for the female members and they are again absorbed in cleaning the house.”

Tiwari writes that Holi is a day of regular work for Dalit adults, though their children may join in the celebrations, playing with water guns or colorful dyes. Meanwhile, even in elite Brahmin families, women have only a limited role in the festivities. They put a great deal of work into preparations, but their only official role in the celebrations themselves is to throw colored water on male visitors who travel from house to house playing music. Once the procession of men moves on to the next location, Tiwari writes, “Holi is over for the female members and they are again absorbed in cleaning the house.”

In a 2016 photo essay, sociologist Siddhi Bhandari described a very different scene in another northern Indian village, Chilkiya, in the state of Uttarakhand. Here, Holi is divided into a day of singing and dancing in private homes and a main festival held in village temples and public squares.

Unlike in most parts of the country, the public celebrations of Holi in Chilkiya are dominated by women. They gather in the temples or the verandas of their homes to play with colors. Meanwhile, village men typically gather separately to drink and gamble.

Bhandari writes that the women of Chilkiya don’t see their Holi celebrations as a defiance of patriarchal norms, but simply as the normal way to mark the holiday.

“They thought that every village celebrated Holi as they do,” she writes. “Interestingly, newcomers to the village were often shy about taking part in the festivities, and had to be coerced by other older women.”

Elsewhere though, norms may be changing. Bhandari writes that in the 2010s, widows in the Uttar Pradesh city of Vrindavan also began taking part in the colorful festivities, defying longstanding traditions that expected them to give up worldly pleasures.