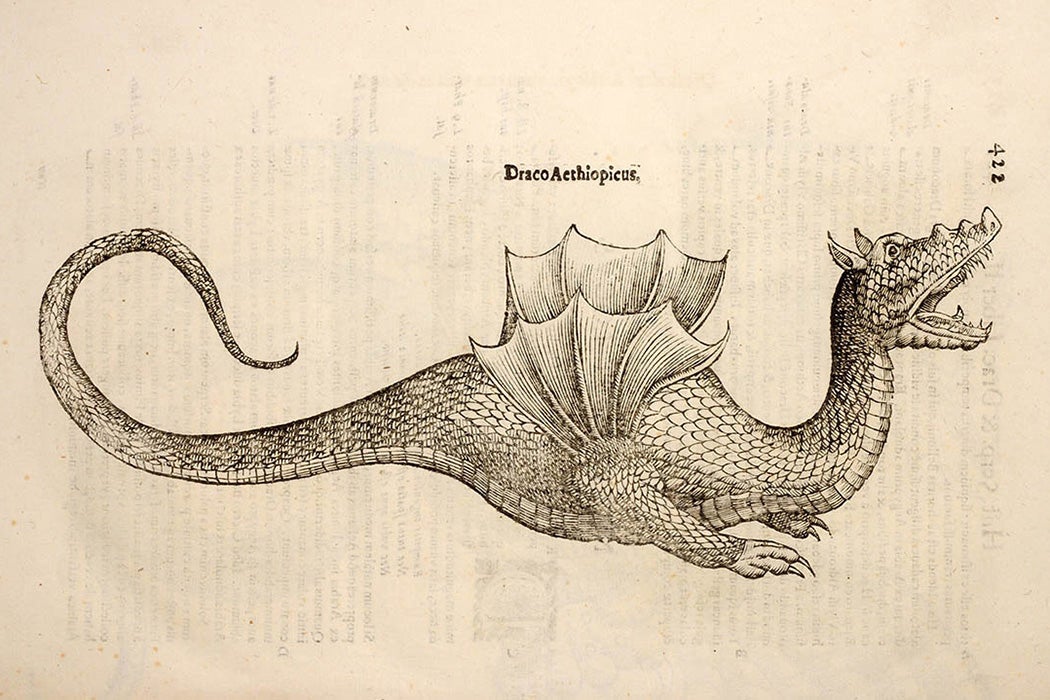 An illustration of a dragon from Serpentum, et draconum by Ulisse Aldrovandi, 1640
By: Livia Gershon
3 minutes
Share Tweet Email Print

Does the HBO series House of the Dragon have you wishing that you lived in a world where dragons were real? If so, scholars Phil Senter, Uta Mattox, and Eid. E. Haddad have some good news—you do.

“Dragons, in the original sense of the word, are real animals,” they write.

Senter, Mattox, and Haddad argue that the European dragon began its life as nothing more than a snake—a “draco” or “drakon” to the ancient Greeks and Romans. But natural history authorities gradually began describing the dragon in more fantastical ways.

“Over the centuries, errors in dragon descriptions accumulated by mistranslation, exaggeration, acceptance of folklore and myth as truth, and conflation of different animals,” they explain. “By the Renaissance, the dragon had transformed into a fabulous creature.”

It was only in the eighteenth century that natural historians determined that dragons didn’t exist at all.

The authors’ conclusions come from a translation they did of the “dragon” section of Schlangenbuch, an encyclopedia of natural history by Swiss physician and naturalist Conrad Gessner published in the 1580s. Gessner attempted to compile everything ever written about each animal species on Earth—including dragons.

The first source used in the dragon section of Schlangenbuch is Homer’s Iliad, probably written in the ninth century BCE. Six passages mention the drakon, a creature that, from the context, is clearly a snake. Homer didn’t seem to be referring to any specific type of snake and neither did Aristotle, whose fourth-century BCE History of Animals noted that the eagle eats drakons. But, in the first few centuries CE, many Greek and Roman sources began to describe drakons or dracos as constrictors, apparently frequently basing their descriptions on pythons imported from India.

So how did the dragon get its wings? The authors write that Greek, Egyptian, and Indian myths described flying serpents, but only as composite creatures like the Pegasus or satyr that existed in the realms of gods and heroes. The first of Gessner’s sources to assert that, as a rule, dragons could fly was Augustine of Hippo (354–430 CE). He described dragons as Earth’s largest animals, living in caves and emerging to spread their wings. While Augustine mentioned this in an exposition of a psalm, not a work of natural history, natural historians adopted his description. By this time, the importation of pythons to Europe seems to have ended, so people there no longer had direct contact with drakons and couldn’t check them for wings.

In the medieval era, winged dragons were common in illustrated bestiaries. These dragons also commonly had legs, although natural historians of this time continued to insist that they did not. But, in the sixteenth century, taxidermic hoaxes became common in the Mediterranean world, often featuring bipedal, winged dragons. Gessner, among others, was fooled by this trickery and accepted that these dragons really existed. Subsequent encyclopedias followed his lead. It was only in the eighteenth century that natural historians determined that dragons didn’t exist at all. But as Senter, Mattox, and Haddad point out, that’s only because they were thinking of Gessner’s dragons, not Homer’s.

Snake to Monster: Conrad Gessner's Schlangenbuch and the Evolution of the Dragon in the Literature of Natural History
By: Phil Senter, Uta Mattox and Eid. E. Haddad
Journal of Folklore Research, Vol. 53, No. 1 (January/April 2016), pp. 67–124
Indiana University Press